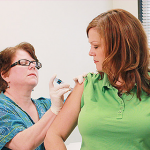 “It is the commitment and impact [of the organization] that is the key concern.” —Alfred Sommer, Chair of the Jury, 2017 Lasker~Bloomberg Public Service Award

The mission of the Albert and Mary Lasker Foundation is to improve health by “accelerating support for medical research through recognition of research excellence, education and advocacy.” Each year, Lasker Awards are given to scientists that embody this mission. Organizations are also eligible for awards through the Lasker~Bloomberg Public Service Award that alternates years with the Lasker~Koshland Special Achievement Award in Medical Science.

This year’s recipient of the Public Service Award is Planned Parenthood Federation of America (PPFA), “for providing essential health services and reproductive care to millions of women for more than a century.” PPFA began in Brooklyn, New York, where in 1916 Margaret Sanger opened the first birth control clinic in the US; in 1942 the organization changed its name from The American Birth Control League to Planned Parenthood. To place the 2017 Lasker~Bloomberg Public Service Award in context, PLOS interviewed Chair of the Jury Alfred Sommer, University Distinguished Service Professor and Dean Emeritus, Johns Hopkins Bloomberg School of Public Health.

With this award, PPFA joins other collaborative efforts including Médecins Sans Frontières, Bill & Melinda Gates and the NIH Clinical Center as Lasker Public Service Awardees. Since recent previous awardees in this category were individuals, PLOS asked Sommer what does this say about how science and medicine work today, or about the efforts needed to impact human health. “The intent of the Public Service Award has always been recognition of contributions to expanding investments in biomedical/health research and advancing the public’s health,” he responds. “In recent years there has been slightly greater attention paid to the latter, and therefore to the individuals and institutions that have made a real difference.”

Sommer was circumspect and honest when asked to reflect on the timing of the committee’s decision process, in relation to political discourse in the US at that time over the proposal to replace the Affordable Care Act with a plan that would defund approximately 40% of Planned Parenthood’s annual budget. “The discussion is always free-wheeling, and every member is free to raise whatever perspectives they like,” he says. “I am not at liberty to discuss the actual vote, but I can say there was broad agreement with this year’s choice (as there usually is every year, once the discussion and votes are taken).” He continues that the Lasker Awards are “meant to recognize extraordinary achievements, and bring these achievements to the attention of the public. It was no different in this case.”

The origin story of Planned Parenthood is fascinating. While family planning may be the founding service, it’s likely the public doesn’t realize the breadth of services offered by the organization, from sex education programs that reach 1.5 million people annually to over 4 million tests and treatments to both men and women (in 2015 alone) for sexually transmitted infections. “The purpose of all Lasker Awards is to better inform the public about the individual, work, and organization that is being honored,” says Sommer. In recognizing PPFA, he continues, “we would hope that the public will have a better understanding of all the contributions to health made by PPFA.”

While publications and publicity are not a requirement for receipt of the Public Service Award, placing this type of information into the public domain helps to inform policy and to improve health outcomes. Among the PLOS journals, two articles have corresponding or contributing authors affiliated with PPFA. In the recent PLOS ONE article, “Parents’ views on sex education in schools: How much do Democrats and Republicans agree?” researchers from Planned Parenthood found that comprehensive sex education is supported by a vast majority of parents, both Democrats and Republicans.

In the PLOS Medicine article, “Comparison of Outcomes before and after Ohio’s Law Mandating Use of the FDA-Approved Protocol for Medication Abortion: A Retrospective Cohort Study” researchers followed outcomes of a law that took effect in 2011 requiring abortion providers to follow specific US Food and Drug Administration guidelines, created in 2000, when giving patients a combination of two drugs to induce abortion. Their findings, covered by The Guardian and Los Angeles Times, indicate that women experienced a higher rate of complications and were nearly three times more likely to require additional medical intervention after the law was implemented.

Some say that receiving a Lasker Award hints at prediction of a Nobel Prize. To put this attention to awards and prizes in context, it’s worth understanding the compelling origins and motivations of the Lasker Foundation directly from “The Lasker Legacy” video. After watching you might want to make your voice heard through suggested resources on the PLOS Stand Up for Science webpage. Work from individual scientists receiving this year’s Lasker Awards is described in a previous post.

Alfred Sommer is University Distinguished Service Professor and Gilman Scholar, Johns Hopkins University; Dean Emeritus and Professor of Epidemiology and International Health, Johns Hopkins Bloomberg School of Public Health; Professor of Ophthalmology, Johns Hopkins School of Medicine. He served as Dean of the Johns Hopkins Bloomberg School of Public Health from 1990-2005. Sommer is a member of both the National Academy of Science and the National Academy of Medicine, and chaired the Board (on which he still serves) of the Lasker Foundation from 2008-2014. His research interests include outcomes assessment, child survival, epidemiology of visual disorders, glaucoma, vitamin A deficiency, blindness prevention strategies, cost-benefit analysis, the growing interface between medicine and public health, and clinical guidelines. He is most widely known for and received the 1997 Lasker Clinical Medical Research Award for his work on Vitamin A therapy for preventing infections and blindness. Sommer served as Chair of the Jury for the 2017 Lasker~Bloomberg Public Service Award.

How to Choose the Perfect Kitchen Island

5 Reasons You Should Hire a Digital Marketing...

Landmark release of Termination of Transfer tool from...

Unscrupulous people and scams can hit you anywhere. We want to protect our users and help them take care of their security, so we have collected the most relevant information and tips on what to look out. Please read more